Mom Kaylie with the triplets, from left, Declan, Rowan and Cian.

They are miracle micro-preemies triplets Cian, Declan and Rowan DeShane, survivors of extremely premature deliveries whose birthdays span not just different days and months, but two different years and decades.

Cian was born first on Dec. 28, 2019. At just 22 weeks, 6 days, he was one of the youngest infants to arrive at UVM Medical Center’s Neonatal Intensive Care Unit (NICU). He weighed only 1.08 pounds, not much more than a 16-ounce bottle of soda.

Remarkably, each made it through the natural birth process. “When my water broke, I burst into tears because I didn’t think they could survive being born so early. I thought it was all over,” says their mom, Kaylie, who had worked with a fertility clinic to get pregnant.

"All of the decisions our care team made saved all of my babies."Kaylie DeShane
Mother of Micro-Preemie Triplets

To put the DeShane triplets’ very early births into perspective, a baby is considered full-term at 39 weeks. The World Health Organization defines preterm as babies born before 37 weeks of pregnancy. Less than 32 weeks is defined as “very preterm” and at or under 25 weeks is “extremely preterm.” Until the past year or so, health care organizations like UVM Medical Center did not attempt high-tech intensive medical interventions to resuscitate infants born at 23 weeks or less because their survivability rate was so low and the list of diseases and disabilities so long for those infants who lived. 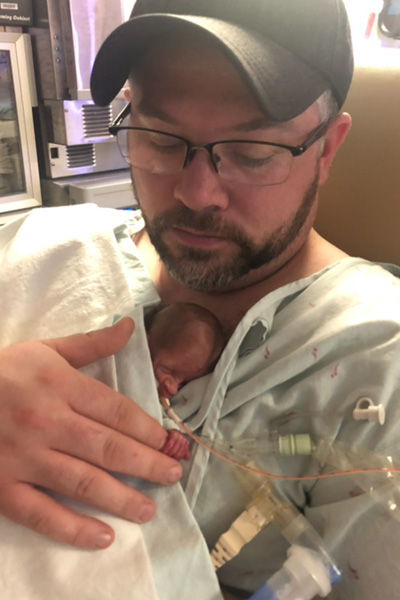 Dad Brandon with Rowan at 15 days. Her entire hand was the size of his fingernail.

“Every organ and system in these extremely low birth-weight babies is ill-prepared to meet the world,” explains Roger Soll, MD, a neonatologist at UVM Medical Center and the  H. Wallace Professor of Neonatology at the Larner College of Medicine. He says there isn’t any one breakthrough that accounts for his team’s recent successes with extremely preterm babies.“ We’ve perfected our team approach to an optimal system of care, starting with maternal-fetal medicine during the pregnancy and delivery, and continuing to the NICU where respiratory therapists, nurse practitioners and nurses all work together to provide round-the-clock care.”

Hannah Jackman, RN, has a vivid memory of the day Cian was born. “It seemed like there were dozens of healthcare workers in the delivery room, all in yellow gowns, awaiting three tiny triplets. I was one of them, and I remember my heart feeling like it was leaving my chest as I watched Cian’s parents sob and pray,” she says. “I wanted a miracle for this family so badly.”

For Kaylie and her husband, Brandon, the decision was easy. They told the medical team: “Do everything to save them.”

Cian was immediately intubated. Declan and Rowan were both septic at birth and given intravenous antibiotics. The infants were placed in incubators, wires connecting them to monitors so caregivers could keep track of their temperatures, heart rates and breathing. Tubes delivered medicines and fluids to their tiny veins. Pulse oximeters measured the oxygenation of their blood.

Despite the tangle of equipment, mom and dad were encouraged to hold their infants skin-to-skin. During the triplets’ months-long stay in the NICU, the couple made certain one of them was there every day. They each spent weeks at a time at the Ronald McDonald House while the other tended to their two older children at home three hours away in Norwood, N.Y. When visitors were restricted to one parent per pediatric patient due tothe COVID-19 pandemic, the couple joked that they had more than enough babies to be allowed in the NICU together on weekends.

“We were already in survival mode when COVID hit, so it was just one more thing,” Kaylie says. “We were already washing our hands constantly and being especially carefulto keep them safe from any germs.”

It Takes a Team

The infants had their own primary nurses assigned to them during every shift of every day. This consistency of care meant that every potential problem was noticed and immediately attended to.

After Cian’s birth, nurse Jackman signed up to be his primary nurse during her 12-hour day shifts.

"I got to spend four months caring for this tiny but mighty human, watching in amazement as he overcame obstacle after obstacle."Hannah Jackman, RN
University of Vermont Medical Center

“It is a relationship like no other – these parents are trusting you with their newborn. Advocating for Declan became my biggest priority,” says Julia Watsky, RN, one of the trio of primary nurses dubbed the “dream team” who worked the night shift on Sundays, Mondays and Tuesdays. “I learned every aspect of Declan’s care – from how he liked to be positioned to knowing when he needed a little extra help breathing.” 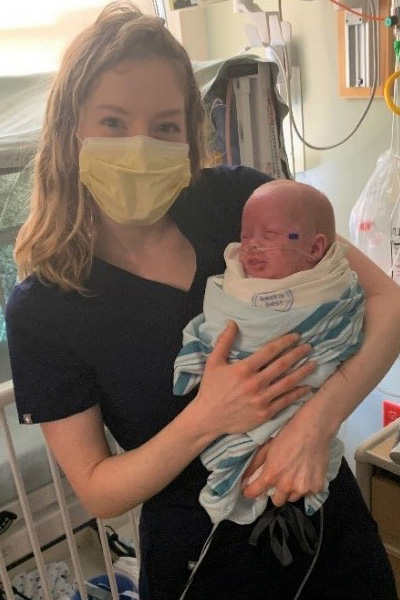 Julia Watsky, RN, and Declan in the NICU.

One night Ashley Ostler, RN, noticed that the normally lively Rowan was hardly reacting to her.

“Rowan is typically a sweet, feisty lady. She is not exactly patient and she makes her demands known,” observes Ostler. “She often made me laugh late at night because she really does know how to push your buttons while melting your heart with her adorable little face.”

When Rowan went limp and her abdomen became distended, Ostler rightly suspected she had developed a common but serious intestinal disease called necrotizing enterocolitis, or NEC, which required many interventions until she stabilized.

Cian also developed NEC and, at one point, his parents were asked to create an end-of-life plan. “That taught me to never think we were out of the woods,” Kaylie says.

Lindsey Flanders, RN, remembers the night when Cian’s oxygen needs kept climbing until he reached 100 percent and couldn’t go any higher. “Knowing Cian, I knew this wasn’t his norm and that he needed additional support to bring his oxygen requirement back down.” He was started on nitric oxide to relax the vessels in his lungs and that did the trick.

After 106 days in the NICU, Declan, nicknamed “the Chunkster” because he was the heaviest of the bunch, was the first to go home on April 17. “It was truly a bittersweet moment” says nurse Watsky, who made certain to be there to say goodbye to Declan, even though it was her day off. “After seeing him grow from just over 1 pound, to learning how to eat, how to breathe on his own, and so much more in between – I was so proud of him,” she says.

“Rockstar Rowan” went home on April 30. And firstborn Cian finally joined the rest of his family on May 4. “I’m so proud of the chubby, feisty, blue-eyed, beautiful boy he is,” nurse Jackman says.

The triplets left the NICU with respiratory support and monitors but eating all of their foods without issue. As of July 15: Cian was 13 pounds, 1 ounce; Declan was 14 pounds, 11 ounces; and Rowan was 10 pounds. They are hitting all of their milestones -- babbling, cooing, laughing, smiling and rolling over.

The DeShanes’ relationship with UVM Medical Center is far from over. 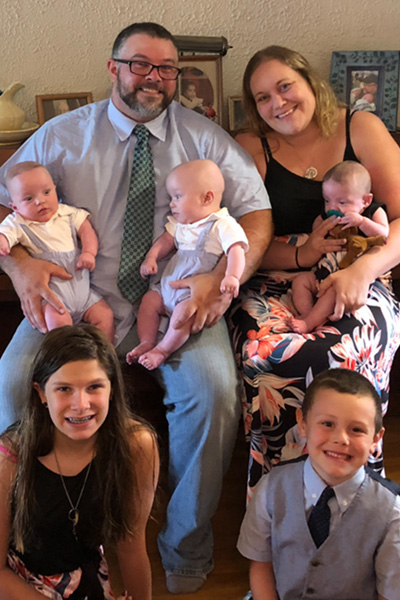 They make regular visits to see a pediatric pulmonologist and ophthalmologist. And neonatologist Deirdre O’Reilly, MD, director of UVM Medical Center’s Neonatal Medical and Developmental Follow-up Clinic, will see the preemies regularly during their first three years to assess their progress, especially regarding motor, language and cognitive skills. If there are gaps, her staff will connect them to the appropriate supportive services. “Getting adequate and targeted therapies can be life-changing for babies,” she says.

In her 13 years of practice, Dr. O’Reilly had never seen a baby born as early as Cian survive. Each of the triplets are doing better than she expected, and that success is what makes her work so worthwhile. She says: “It really is amazing, because you can learn about the numbers of premature infants that survive, but really experiencing it with the parents and seeing the joys in their faces, and the kids too, it’s just magnificent.” 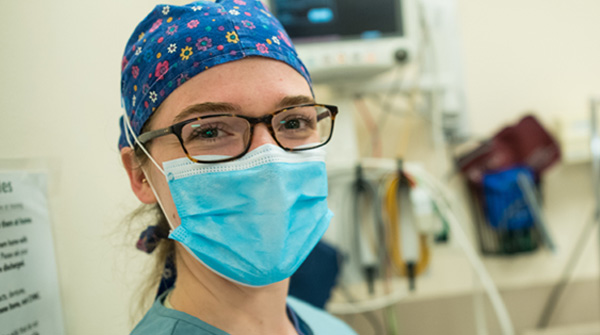 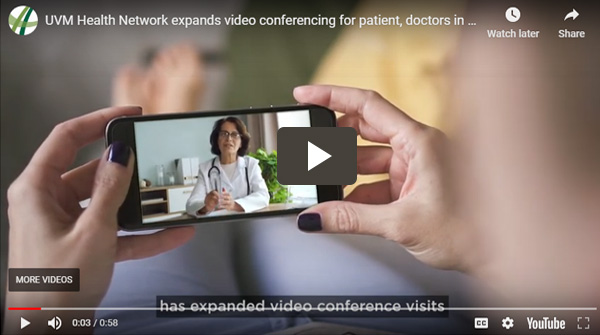 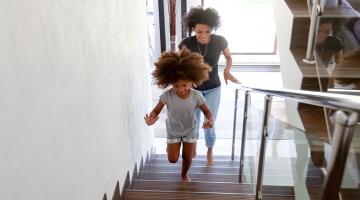 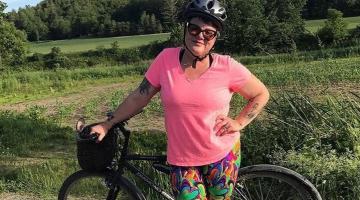 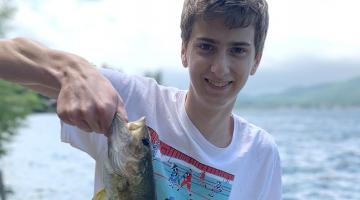 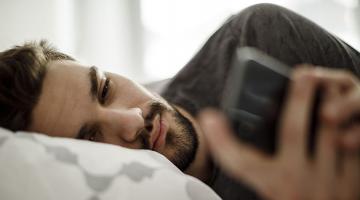 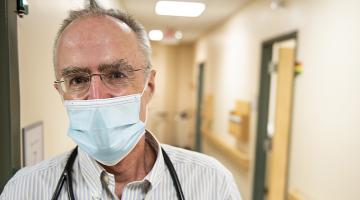 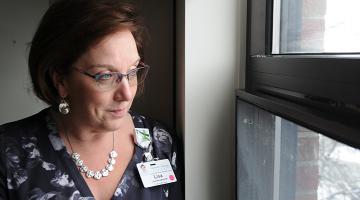