GERD can lead to Barrett's esophagus. Our patients receive expert care from board certified subspecialists at The UVM Medical Center in Burlington, VT. 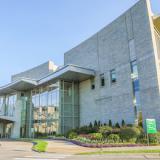 Barrett's Esophagus: What You Need to Know

You can lower your risk of developing Barrett's esophagus by eating plenty of fruits and vegetables and making sure you get all of your daily vitamins.

Barrett's esophagus is best managed by a group of specialists that includes gastroenterologists, pathologists and radiologists. Our physicians and other support staff work together as a team, providing expert care.

Our team uses advanced technology to diagnose and treat Barrett's esophagus. We offer upper endoscopy for diagnostic testing and endoscopic radiofrequency ablation treatment, a minimally invasive procedure that reduces your side effects. Learn more about diagnosis and treatment for Barrett's esophagus.

The University of Vermont Medical Center's Gastroenterology and Hepatology Outpatient Clinic is managed by six board certified subspecialists, including two with certification in endoscopic ultrasound. We perform more than 9,000 various diagnostic and therapeutic endoscopic procedures every year.

What is Barrett's Esophagus?

Barrett's esophagus is considered a precancerous condition. People with the condition are at an increased risk, although their overall risk remains low, of developing esophageal cancer (called adenocarcinoma).

The exact reason tissue changes occur in Barrett's esophagus is unknown, but several factors can increase your risk of developing it, including:

The treatment that is right for you will depend upon factors such as your biopsy results, overall health, personal preferences and physician recommendations. If your biopsy shows many changes pointing to esophageal cancer, your doctor may use an innovative procedure such as endoscopic radiofrequency ablation.