Count on The University of Vermont Medical Center to help you decide whether testing for Down Syndrome or Chromosomal Abnormalities is right for you and your baby. 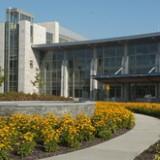 Testing for Down Syndrome Trisomy 21 and Other Chromosomal Abnormalities

It may be helpful to ask yourself two questions when deciding whether you and your partner want to have any testing done: Will this information be useful to me? What am I going to do with it once I get the information? Based on you and your family's values you can choose to do no testing at all, or testing or diagnostic testing.

These tests do not tell you if your baby has Down syndrome. The tests determine if you are at higher or lower risk to have an affected baby. Many patients have a "positive" screening test, but on further testing (diagnostic testing) are found to have a baby that does not have Down syndrome or other chromosomal abnormalities. There are many different types of tests, which include blood testing of the pregnant patient and/or ultrasound testing.

Done with ultrasound and a blood test done between 11 and 13+6 weeks of pregnancy. If this test shows an increased risk then second trimester blood tests can be done - step-wise sequential screen, or diagnostic testing can be done

A combination of the ultrascreen and Quad marker tests - you do not get your results until all testing is complete. In general the Integrated test is most accurate - which means it detects the same number of affected babies as the other tests but has the lowest rate of positive tests. Therefore fewer women overall will have results showing an increased risk and requiring further testing. A reason to do the ultrascreen only would be if you wanted the test result sooner. A reason to do the Quad screen only would be if you were too late to get the first trimester screen. Most insurance will pay for any one of the above tests.

These are tests to tell if your baby has Down syndrome or other chromosomal abnormalities.

CVS and amniocentesis are invasive tests and do carry a small risk to the pregnancy. Based on you and your family's values you can choose to do no testing at all, or screening testing or diagnostic testing.

Most screening tests will detect about 90% of pregnancies affected by Down syndrome when using the standard cutoff - this means that 90% of affected pregnancies will have a test result which is considered high risk - i.e. less than 1 in 270.

Each screening test has a screen positive rate which can be looked at as the percentage of women who will have a "positive" test. Most of the women with a "positive" test have babies that do not have a chromosomal problem.